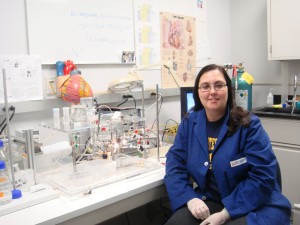 Ph.D. Dissertation topic: Cardiotoxicity assessment of new chemotherapy approaches and development of a fluorescent indicator dilution method to study cardiac capillary permeability. The overall aim of this project is to develop and test new chemotherapeutic agents that cause fewer side effects than currently available treatments. Specifically, we are interested in reducing thecardiotoxicity of chemotherapy drugs because heart dysfunction after chemotherapy is one of the most disabling and life-threatening long term side effect in cancer patients. As part of my dissertation, I am responsible for in vivo tumor models and testing of chemotherapy drugs. I have worked on the development of a fluorescent indicator dilution method that can be used in testing drug cardiotoxicity in an isolated heart setup. This new method can be included in drug testing protocols along with common indicators of impaired heart function, such as changes in contractility measured using the isolated heart setup, or structural and functional changes measured through serial echocardiography. In a tumor-bearing rat model created by inoculation of rat breast adenocarcinoma cells (MATBIII cell line), animals treated with traditional chemotherapy show a significant increase in cardiac capillary permeability surface area product (PSP) compared with control animals as measured by our fluorescent method in the isolated rat heart setup. The changes we observed are consistent with impairments in left ventricular function detected using other measurement techniques in the same animals, such as measurements of pressures inside the left ventricle and serial echocardiography. Therefore, our indicator dilution method can complement classical methods of cardiotoxicity testing in animal models, and can be used as an additional source of information regarding cardiac tissue dysfunction after chemotherapy. We are currently working on the development and in vitro testing of a modified chemotherapy drug that targets the cell nucleus and/or cancer cells specifically. The expectation is that the new drug will be less cardiotoxic and will cause a lesser increase in capillary permeability along with smaller impairments in left ventricular function , while showing at least comparable effectiveness to traditional chemotherapy in killing cancer cells.