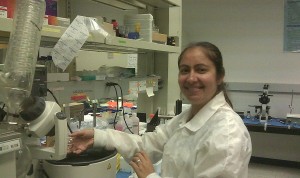 My current research interests include the design development of novel nano- and microparticle drug delivery systems for the treatment of various cancers. During the past few years, I have been actively working on development of formulations which can simultaneously carry imaging/hyperthermia and chemotherapeutic agents to the target site. My work involves cancer-related research including medicinal chemistry, cancer therapeutics and diagnostics, and nano- and microparticle anticancer drug systems.

The goal of this multidisciplinary grant is to develop and validate sensor technology to detect the biological response to biological or chemical toxins to predict their effect on military personnel in the field. My role is to develop metal nanoparticle conjugations schemes for developing optical SERS based sensors.

The goal of this study is to develop PET and SPECT imaging agents that more closely resemble microspheres used in Y-90 Selective Internal Radiation Therapy (SIRT). The agents are polymer microspheres with controlled biodegradation labeled with Ga-68 or Tc-99m. Studies are conducted in cell culture and rats.

The goal of this project is to generate liposomes and polymer micro- and nano-particles for drug delivery applications. Most recently we developed new particles for breast cancer and liver cancer research. My role is to optimize the encapsulation of doxorubicin and indocyanine green into PLGA nanoparticles and characterize the particles using SEM, TEM and DLS.